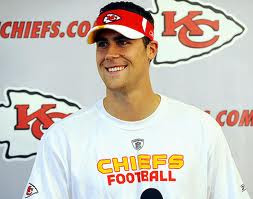 What a Game! The Chiefs offense was near perfect in their dismantling of the Seahawks in Seattle on Sunday afternoon. 503 total yards of offense, 41 minutes of possession, and a 42-24 final score. The game really wasn't close as Seattle scored 7 of their points on a blocked punt in the first half. No longer will this blogger use the keywords "Matt Cassel Sucks". His play the past few weeks has made a believer out of me. Of course the fact that Dwayne Bowe is playing out of his mind and Jamaal Charles continues his excellent play is helping the cause. Cassel threw for 233 yards and 4 TDs, three of them to Bowe. Dwayne Bowe also extending his franchise record string of games with a TD catch and the record for most TD receptions for a Chief in a season with 14 - there are still 5 regular season games on the schedule. Oh, and did I mention he also leads the League in TDs.

Then there is Jamaal Charles - second in the league in total rushing yards, and he doesn't even have the most carries on the team! He averages a stunning 6.3 yards/carry, more than a yard ahead of the League's leading rusher Arien Foster. He reminds of Marcus Allen, only much faster. He can squirt through the smallest of holes, or beat you with his speed around the outside.

The Chiefs remain 1 game ahead in the AFC West with little margin for error, what fun the remainder of the year will be. I think we can look for a beat down of gigantic proportions as the Broncos (and Todd Haley's Best Friend Josh McDaniels) come to town next Sunday in a rematch of the Chiefs worst game a few weeks ago.
at 1:28 PM