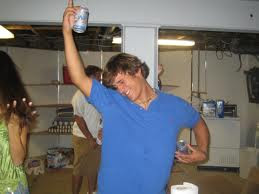 Brian Euston's blood alcohol on the night he died was .387. That is extremely high. Most people would have been long passed out in a pool of their own vomit by that point. It seems Brian was a seasoned drinker, and probably not a stranger to the Westport bars - No shame in that, necessarily. Yours truly has been known to knock down more than a few on occasion. But I can't even fathom the amount of alcohol an adult male would have to drink to have that high of a BAC. There is no way he knew what he was doing when Stanford Griswold allegedly punched him.

It is a sad story, no doubt. A young man with seemingly lots to live for dead because of the reckless actions of himself and another man at 3 in the morning outside of a bar. The grief of his family must be tremendous. But this didn't have to happen, and the chain of events, it seems was started by Brian himself. Drinking and drugging will kill you. We see stories like this all the time, and I've written about some here on this blog.

As for Stanford Griswold? He will pay for what he did, and Involuntary Manslaughter seems a fitting charge to me based on the information readily out there in the media. I certainly don't think he intended to kill Brian - The information out there says he only hit him once and then ran. When an obviously blind, stinking drunk dude is annoying (read hitting on) your girlfriend, a lot of guys would punch him in the head. Not that this is right, and shows another side of the problem. You can't go around punching guys because they are being an asshole.

Really the bottom line is not to put yourself in situations where bad things can occur, because like it or not they do. And that's just a brutal reality of life.
at 7:54 AM

RIP Brian. You were a great guy and you will be missed by all.

Stop making stuff up there was nothing in any news report, police report, or statement by the DA's office that drugs had anything to do with Brian's death. If anyone was on drugs I'd bet the convicted felon (drug and gun charges) was the one that was high.

Who cares if he was on drugs or not - his BAC level was over 3.0!! You've got to be a self destructive maniac to drink that much, drugs or not, this was one MESSED UP individual.