Emanuel Cleaver Confident in the Face of Redistricting 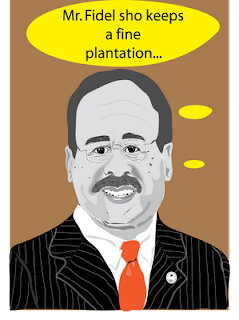 There is a Federal census every 10 years as mandated in the U. S. Constitution. For those of you that didn't notice, that census was in 2010. The year after the census, State Legislatures must decide if, and how districts should be changed to reflect the changing population centers. Sometimes states even lose or gain seats. That's what is happening in Missouri right now. Starting with the 2012 Congressional elections, Missouri will have 8 Representatives, down from 9 currently.

What does all this mean? The Missouri State Legislature is heavily Republican (roughly two thirds). Locally, it will mean that the seat currently held by my (and your) favorite Congressman will certainly have to be enlarged. That will not be an advantage for the Honorable (cough, cough) Mr. Cleaver. Likely, his district will include more of eastern Jackson County like Blue Springs, Oak Grove, etc - and possibly even parts of the Northland in Kansas City. These areas are heavily more conservative than the inner city where Cleaver currently holds strong support. He may have to actually run on ideas rather than race.

Representative Cleaver, who currently heads the Socialist and Race Baiting Congressional Black Caucus, remains confident about his political future. He probably is safe, The Justice Department will be called on if neccesary to enforce a provision of the Voting Rights Act that virtually assures a majority black district stays that way. But he may have to listen a little harder to all of his constituants, black and white.
at 9:46 AM

I was not aware that Missouri was mostly Republican (I don't follow politics, I figure that whatever the 10 people who actually DO run this country and remain nameless to the public make all of the major decisions anyway) but it is surprising that Missouri is Republican as it's two largest cities (KC and St. Louis) are mostly urban ghettos. How does that happen?

1) The Voting Rights Act does not affect Missouri's 5th Congressional District as it is only 24.4% black. It has to be nearly 50% to apply.
2) Rural Missouri is VERY conservative.