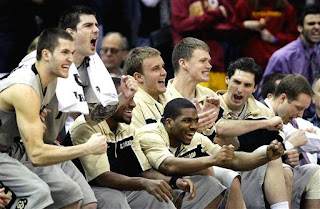 The Big 12 Tournament is officially underway, as the opening round games yesterday set up the quarterfinals, which will begin today with Kansas vs. Oklahoma State.

The Cowboys survived a 53-52 win over a Nebraska team that was fighting for a slim chance of sneaking into the NCAA tournament. Oklahoma State built a big lead, lost it, and then held on for dear life at the end. A nice win for the struggling Pokes, but 53 points is not going to cut it against KU, who absolutely manhandled Oklahoma State in the team's regular season meeting. I expect a similar performance this morning.

The best game of the day was Colorado's close win over Iowa State. Colorado was fighting for its tournament life, and used a 12-2 run late to erase a late deficit and beat the Cyclones, 77-75. Now the Buffs get a well rested KState team that has been on fire lately. However, Colorado swept the Wildcats during the regular season. This 4 vs. 5 matchup should be the best second round game. If CU wins, it almost assuredly has punched a ticket to the NCAA tournament.

The worst game of the afternoon was Oklahoma's drubbing of Baylor. Baylor lost star center Perry Jones to a suspension, but that was no excuse to get blown out by a crappy OU team. Scott Drew continues to solidify his reputation as one of the worst coaches in the Big 12, and with upcomming NCAA violations (seriously, how else do you think he kept bringing talented players to Waco, Texas), it appears this is the likely end to Baylor's recent run of success in the league. Back to the bottom where you belong, Baylor. Oklahoma will now have the honor of getting destroyed by Texas, who is trying to avoid yet another classic late season collapse under Rick Barnes.

Missouri continued its recent run of poor basketball in its nailbitter against mighty Texas Tech (the same Tech that just fired head coach Pat Knight). Mizzou won 88-84, but it appears the Tigers are in a funk they cannot get out of. MU doesn't play defense and is prone to stretches of poor shooting and turnovers. The Tigers still have time to turn it around, but the past month has been nothing but disappointment for Mizzou fans. Missouri has a chance to get back on track tonight against a tough Texas A&M team.
at 9:33 AM