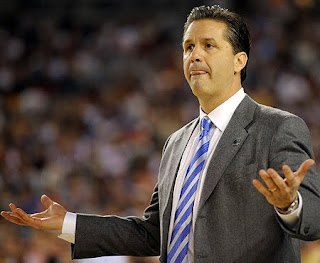 The Bob Knight-John Calipari feud has taken a new twist, as Knight has now resorted to making false claims about Calipari's players. Knight recently criticized Kentucky's 2009-2010 team, claiming that they started five players who did not attend second semester classes. While the team posted a dreadful 2.18 spring GPA, Knight's claims ended up being false.

Knight hasn't been shy about his feelings towards Calipari, and for good reason. There is no way to sugar coat it - Calipari is the slimest coach in big-time college basketball. He has had two Final 4 appearances vacated with two different schools, and it is pretty clear that he has constantly bent the rules to try to win games. Outside of the state of Kentucky, you would be hard to find any basketball fans who didn't dislike the proven cheater.

Despite all of Calipari's scumbag tendencies, Knight is out of line criticizing Kentucky's players. Kentucky had players who went to class and made passing grades despite leaving school early. By stretching the truth, Knight losses credibility in his attempt to fight for a worthy cause - eliminating the one and done era in college basketball.

If Kentucky wants to sell it's soul to win, let them. The University decide long ago that it would do anything to get back to consistent success, and that is why it hired Calipari. Knight, and other respected members of the game, have every right to be critical of Calipari and Kentucky's slime - as long as it doesn't cross the line. This time it did, and Knight owes the Kentucky players an apology.
at 12:13 PM