Royals Face Indians with First Place on the Line 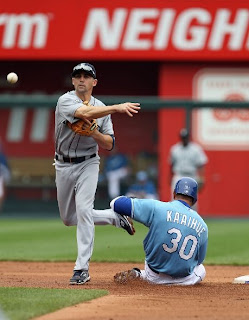 The Royals had a productive weekend, winning a series against lowly Seattle and pushing its record to 10-5 for the season. However, the Royals currently sit in second place behind the surprising Indians. Naturally, Kansas City begins a four game home series with Cleveland tonight.

The Royals had a great opportunity to sweep Seattle and pull even with Cleveland; however they came short against Seattle’s young Michael Pineda. Pineda was able to contain the Royals’ offense and limit Kansas City to only two runs. Before Sunday, the Royals’ bats had been red hot, and they will need to find their offense in a hurry with a tough upcoming schedule. Kansas City has a series with Cleveland, Texas and then Cleveland again.

Tonight’s game provides a golden opportunity for both Cleveland and Kansas City to prove they are for real. Both teams had terrible seasons last year, and have become the biggest stories in baseball. Most experts and fans still aren’t sure how legit the Royals are, but we will have a real good idea after this series.