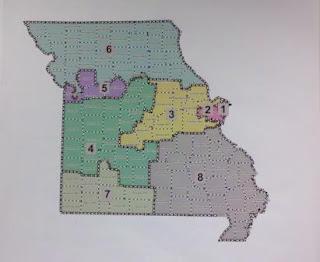 On Thursday, The Missouri House of Representatives approved their version of the newest US Congressional District maps for Missouri. Redistricting needs to be done because the State lost a seat in the 2010 Census. Missouri will now have 8 Representatives in Washington DC instead of nine. A district would be lost in the St Louis area, removing one currently Democratic Representative (Probably Russ Carnahan-good riddance). The map has been sent to the Senate for approval.

In the new map, Congressman Cleaver's 5th District will change. It would no longer include any of Cass county, but would add three rural counties to the east of Kansas City. Also added to the 5th, parts of Kansas City and Gladstone north of the river - subtracted would be the Northeastern part of Lee's Summit. Still a majority Democrat district, but not as much so as has been the case. Unfortunately Cleaver is probably safe for the foreseeable future.

Most Democrats in the House were against this redistricting plan arguing that in the best of times for Democrats they could only win 2 of the 8 seats while in general statewide elections Democrats garner around 50% of the votes typically. And of course Jonas Hughes, undoubtedly the DUMBEST member of the Missouri House had something to say as well.

There were also a few Republicans not happy with the map. Those from the three rural counties added to the fifth district were apparently not pleased that a Communist sympathizing, race-baiter will be their new US Congressman. A very similar map will likely be approved by the Senate and go to the Governor for signature. It will be interesting to see if the Democrat Jay Nixon will veto or not.
at 9:41 AM

This article was done by a staff writer who is no longer with us. However his I.Q. was 168 and he has several degrees so, while you're trying to decide "mayonnaise or mustard", he's busy restructuring molecular models.

We're pretty sure that makes you the Goober.