Royals Fall to Twins in Extras 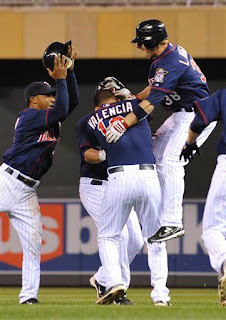 After starting the season with a couple of thrilling wins in extra innings, the Royals have now been on the wrong side of two extended games. Last night, Kansas City fell to Minnesota, 4-3. As a result, the Royals are no longer in first place, trailing the White Sox by a half-game. Chicago grabbed the division lead with its own extra-inning magic against Oakland. The Royals were in a dogfight all night, and were forced to manufacture runs off of sacrifices and infield singles. The weak offensive output wasted another solid start from Jeff Francis, who now has three straight no decisions despite only giving up six runs in his first 20 2/3 innings as a Royal.

The difference in last night’s game was the performance of the bullpens: Minnesota’s relievers were absolutely lights out, retiring 12 consecutive batters and never allowing KC to pose a threat. Robinson Tejeda struggled, loading the bases before Danny Valencia won the game with a single.

Kansas City has a bad habit of dropping close slugfests like last night’s game, especially against the Twins. If it wants to continue to win games and be a contender, it has to start beating Minnesota consistently.