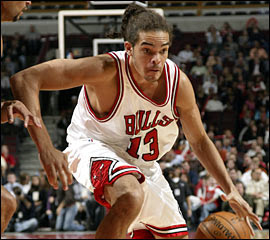 First Kobe Bryant, now Joakim Noah. The Bulls star has been caught using a gay slur towards a fan and will likely be punished by the NBA for his actions. The incident occured just one week after Suns CEO and president Rick Welts admitted that he was gay, one of the first prominent figures in sports to do so.

Bryant was fined $100k for using a gay slur towards an official, so expect Noah's punishment to be similar. The Bulls star has apologized, and given that Noah deals with a lot of abuse from opposing fans night after night, he may be given more of a free pass from other players and the media in regards to his actions than Bryant was.

The bigger picture here is that the NBA can't shake the issue of its players using gay slurs during games. After Bryant was caught hurling a gay obscenity at an official, the league started running commercials featuring NBA stars encouraging players and fans not to use gay slurs during basketball. If Welts' coming out was a step forward for the sport, Noah's actions are a clear step back.
at 8:00 AM