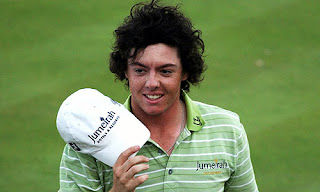 After an epic and unforgettable meltdown at the Masters, Rory McIlroy showed the golf world he has no problem closing a big tournament. McIlroy won the U.S. Open in record fashion, erasing the Masters meltdown and making many golf fans and pundits wonder if he is the next Tiger Woods.

While it is certainly too early to compare McIlroy to Tiger, the young Northern Irishman's dominance this past weekend at the Congressional was very Woods-esque. McIlroy set an open record for a 36 hole score, and never was challenged the entire tournament. It wasn't just the numbers that tell the whole picture, it was McIlroy's performance on the course. Time and time again he played flawless golf, nailing fairways with his drives, hitting chip shots that stopped inches from the hole, and never letting up. It was truley a performance for the ages, and could be the beginning of a very long and storied career.

It is still too early to compare McIlroy to Woods, who has won 14 majors and dominated the sport for several years (and may not be finished). At the very least, someone has stepped up to be Tiger's young, gifted challenger. Golf feels a lot like Tennis did several years ago, when Rafael Nadal was emerging as a threat to Roger Federer, who had single-handedly dominated the sport for several years. The competition between the two was good for tennis, and a potential McIlroy-Woods rivalry would be great for golf.
at 8:00 AM