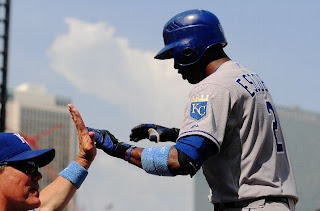 After winning game one of the 1-70 series, the Royals lost two consecutive heart-breakers to their Missouri rival. Kansas City lost two straight games by a 5-4 score to the Cardinals, falling in each game due to late St. Louis home runs.

Sunday night was a back and forth affair, and appeared to be heading towards extra innings thanks to more hot hitting from Alcides Escobar. Escobar tied the game up at 4 in the ninth inning with his first home run of the season, continuing a unprecidented offensive performance from the plate. Escobar's batting average has skyrocketed over the past few weeks, and it appears that Kansas City has finally found a shortstop that can both play defense and hit. Escobar's heroics were not enough, however, as St. Louis' Skip Schumaker hit a solo shot in the bottom of the ninth to give the Cardinals the win.

The game was eerily similar to saturday's game, in which Kansas City lost another 5-4 game due to a late home run. On saturday, the Royals actually held a late lead, thanks to Alex Gordon's home run in the seventh inning. Kansas City would fall behind in the eighth inning due to Matt Holliday's two run blast and was unable to recover. A disappointing end to two games the Royals were in position to win.

The Royals will continue their interleague portion of the schedule tomorrow, hosting the Arizona Diamondbacks. Game one starts at 7:10 p.m., and Luke Hochevar will get the start for Kansas City.
at 2:05 PM