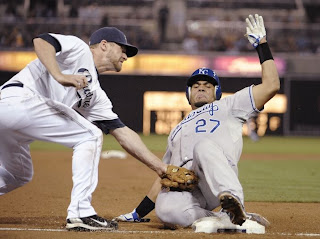 Kansas City couldn't keep the momentum going after taking a series from the Cubs, dropping game one of its series vs. San Diego 4-3. Kansas City never lead, and its comeback effort came up just short against the struggling Padres.

The Royals got off to a poor start, and found themselves in a quick 2-0 hole afterRyan Ludwick blasted a two run homer in the first. The third inning wasn't much better, as San Diego scored on a Jeff Francis wild pitch as well as a throwing error by Eric Hosmer. Despite all the mistakes, the Royals only trailed by one after six innings due to Brayan Pena's two run double. However, the offense soon stalled and the Royals never got any closer.

Jeff Francis (3-9) never got it going against the Padres, and his performance on the road this season has been downright terrible. In games away from Kansas City, Francis is 1-5 with a 6.75 ERA. Kyle Davies is ready to come off the disabled list, who has been just as bad as Francis this year. Hopefully manager Ned Yost continues to use rookie Danny Duffy, who has pitched well this year, and sends either Francis or Davies (or both) packing.

Game two against the Padres starts tonight at 9:05 p.m. Felipe Paulino (0-1) gets the start for Kansas City, as he looks to rebound from his first loss as a Royal.
at 2:01 PM