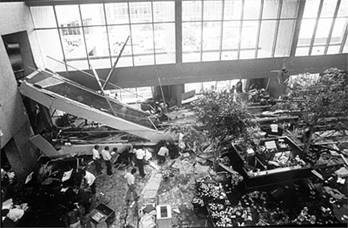 I can't believe that it has been 30 years since the Hyatt Skywalk Collapse. I remember that night well, watching from the TV at grandma and grandpa's house as rescuers ran in and out of the dust and fire, rescuing as many victims as they could. 114 people lost their lives and 216 were injured in Hyatt walkway collapse on July 17th, 1981. At the time and for several years to come, this was the world's largest and deadliest structural collapse in history. The collapse was the result of a faulty change in the skywalk design plans by the Havens Steel Company.

Much like a surreal scene from one of Jack Torrence's fantasy segments in "The Shining", the Hyatt was hosting a formal tea party dance that night. A live Kansas City jazz band was performing, cocktails were flowing and dancing was underway. With over 1,500 guests in attendance, this was quite a gallant affair. At the time The Hyatt was the most prestigious and elegant hotel in Kansas City and the skywalk was one of it's main attractions.

The basic structure of the Hyatt skywalk consisted of 3 suspended open atrium walkways that were about 120 feet long, overlooked the lobby below, and weighed about 64,000 pounds each. The highest fourth floor walkway was suspended directly above the 2nd floor walkway, with the 3rd floor walkway offset from the other two by a few meters. So the lobby of the Hyatt was an open 4 story atrium with 3 open "skywalks" where guests could stand and watch the activities below. At 7:05pm, with that party going strong, there were about 20 people on the fourth floor skywalk and about 40 people on the second floor skywalk when the fourth floor skywalk broke loose from the wall, came down directly on top of the 2nd floor skywalk, and then both skywalks came crashing down to the floor below, instantly killing 111 people and injuring 216. 3 more victims died later in the hospital. The following aftermath lasted 14 hours and included fireman, police and several emergency physicians from nearby hospitals. The rescue operation involved setting up a temporary "morgue" in an adjacent area, and an onsite triage area for those too dangerously injured to be moved. Anyone who was able to walk was told to evacuate immediately, and those trapped under the walkways who were injured fatally were given morphine and told that they were probably going to die. One brave man, who's legs were trapped, authorized the on-site amputation of his legs in order to free him, but he died before they could get him to the hospital due to loss of blood.

In the aftermath of this horror, a group of concerned citizens called the Skywalk Memorial Foundation and family and friends of those who died in the Hyatt skywalk collapse have organized an effort to erect a monument in Hospital Hill at 22nd and Gillham. Today, on the 30th anniversary of the Hyatt skywalk collapse, the foundation unveiled the design for the $800,000 memorial. They are hoping to have the memorial completed by the 31st anniversary of the collapse next year.
at 9:34 PM

I was 7 at the time - I fell and cut my head open that night at home. I remember waiting in the Emergency room at Baptist Medical Center for hours while they brought in the broken and battered bodies of the injured from the Hyatt. I think it was around 1 or 2 AM before I got my head sown up. Show you the scar if you want.

This article lists the date of the accident as July 17, 2012. This needs to be corrected.

Good to know the fine staff at the Kansas City News reads its blog comments--the erroneous date (showing the collapse as occurring on July 17, 2012-8 months in the future as of this writing). So much for journalistic accuracy.

Fuck off Kat - stick in the tampon and get over yourself. You can't help it if you're poor.

Great article on the Hyatt Skywalk Collapse and the Memorial, we were also watching that on TV when it happened, something that you can never forget.

One of the survivors became an Orthodox Christian monastic and is now the Abbess of a Monastery in Maryland, after spending close to 30 years in a monastery in Greece. See the following: