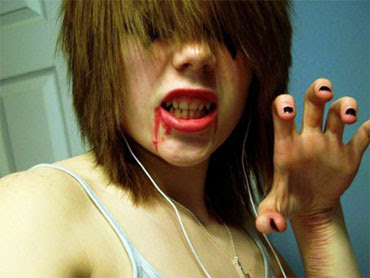 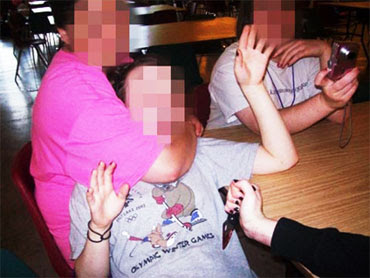 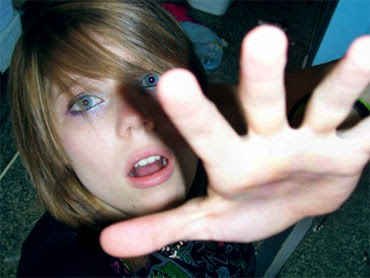 Bustamante murdered her neighbor on October 21st, 2009 and has been awaiting trial ever since, in the meantime being evaluated by psychiatrists and other medical professionals on whether or not she would stand trial as an adult in the murder case. It was determined that Alyssa was performing in the top 3rd of her class in the small hick town school in St. Martins, Missouri - which isn't saying much. Alyssa was constantly seeking attention both in public and on Facebook, acting out, wearing provocative clothing often bearing some clever remark or skulls. She was the typical garden variety small town emo girl, black painted fingernails, punk rock hair, and she claimed that she wanted to start a band called the "penile projectiles", referencing her complete knowledge of sex, probably having had it several times with friends and/or family.

Alyssa Bustamante had been in the custody of her grandmother since she was 7 years old as her Mexican father was busy serving 3 consecutive sentences for assault, one of those involving a knife, which was Alyssa's weapon of choice which until October 21st, 2009, she had only used on herself for "cutting", another classic attention getting device. Initially, a judge had entered a plea of not guilty on Bustamante's behalf, but today she came forward and entered a plea of guilty.

Due to Alyssa Bustamante's complete lack of remorse and the incredible "I did it to see what it would feel like" comment made to police, she will likely spend the rest of her life in prison, or at least we hope so.

You do not have to sign up to comment! If you have any trouble publishing your comment, try hitting the "Preview" button to publish from there. Thanks you from Kansas City News!
at 10:15 AM

Alyssa Bustamante probably just needed her medication that day, but she must have had the fantasy somewhere tucked up in her little brain to even attempt such a thing. Poor girl.

Poor girl.. so sad for her. On that age she should have more guidance. Glad you share your thoughts about these stuff.