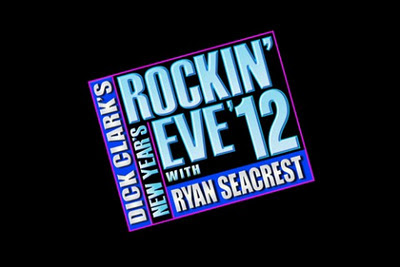 Tonight was the 40th anniversary of Dick Clark's Rockin' Eve on ABC and they pulled out all of the stops with entertainment from Robin Thicke, Lady Gaga, Carlos Santana and a wide assortment of performances from remote stages from around the country. The performances were held on the main stage at Times Square in New York as well as remote stages in Los Angeles and at Disneyland in California. Dick Clark's Rockin' Eve 2012 was hosted by Dick Clark himself, Ryan Seacrest, and Fergie.
Dick Clark made yet another courageous appearance this year after suffering a major stroke in 2004. Clark was positioned at an indoor studio, where he assisted in the commentary prior to the countdown to 2012. Dick did an amazing job once again this year helping us bring in the new year.
The main theme of this year's New Year's Eve 2012 celebration seemed to be LED lighting. LED lighting has just taken over recently, and every stage was brilliantly lit by thousands of computerized LED lighting. Only a couple of the "bands" that performed actually had any musical instruments of any kind, most of the musical acts were rappery / singerish - dance and spaz around the stage with LED lights going crazy. I suppose that is ok, but it would have been nice to have seen at least one actual band with talent. Oh well, maybe next year.
New Year's Eve here in Kansas City was mostly laid back, with most people choosing to have small parties at their homes to keep from driving around. Some other Kansas City New Year's Eve parties included The Zeros at the Brooksider, a small party at Union Station with some random garage band (who happens to own the catering company that put on the party), and a few other small gatherings. The days of the big new year's eve parties in Kansas City are almost over, but it's probably a better idea to have small parties among good friends and stay out of trouble.
Dick Clark's Rockin' Eve 2012 was a great production, although it seemed to lack in talent and originality, except of course Lady Gaga's outfits, which continue to amuse, confuse and keep the tabloids busy with something to write about. Happy New Year Kansas City! Let's have a great 2012.
You do not have to sign up to comment! If you have any trouble publishing your comment, try hitting the "Preview" button to publish from there. Thanks you from Kansas City News!
at 1:01 AM

It's too bad that so many of the Kansas City new year's eve parties have gone away. I suppose that it's better if everyone stays off of the roads that night anyway. It just seems that in the old days Kansas City had a lot more going on on New Year's Eve

New York definitely has the best New year's Eve party, Kansas City new years eve night has gone to the smaller, more intimate parties lately. I'm sure that cuts down on the dui busts and car wrecks, so that's a good thing.