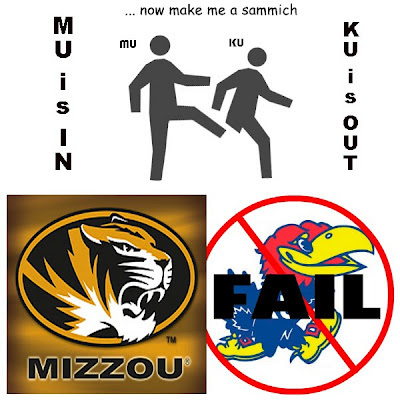 No more proof is needed, after MU completely destroyed Baylor today, it has been proven beyond a doubt that MU is far superior to KU in basketball. KU was easily defeated by Baylor last night and then MU turned around defeated Baylor tonight, proving easily that MU could have stomped all over KU in the 2012 Big 12 Tournament.
The Missouri Tigers, lead by English, defeated the Baylor Bears today by a score of 95 - 76, absolutely TROMPING the Bears, who last night walked all over the Kansas Jayhawks, eliminating KU from the Big 12 Tournament in 2012. KU will be watching the rest of the tournament from their couch as MU advances to the Big 12 Finals. The ease in which the MU Tigers defeated the Baylor Bears shows how bad MU would have defeated the KU Jayhawks had they met in the tournament. As the MU players interviewed stated tonight, "Kansas City is OUR house, NOT ANYONE else's HOUSE" - an obvious territory marking aimed at all of the superficial KU fans that litter our fine city. KU is now a National joke, and MU will be remembered as champions. They should be given the number 1 ranking that the deserve by the time the Big 12 Tournament wraps up, as Kansas proved that it had no business being ranked number 1 in the first place.
A small number of KU fans could be heard grumbling and booing in the beginning of today's match at The Sprint Center in Kansas City, but the KU fans soon shut their mouths as MU just creamed the Baylor Bears, silencing any doubts as to whom was the better local team. MU now owns the Sprint Center and KU must go crawling back to the small hippie town of Lawrence, Kansas where smoking pot and listening to Phish is the main hobby.
MU has fought all the way to the top of the heap in the Big 12 in the 2012 season, and they will be leaving for the SEC being the crowned champions of Kansas City. What a great send off for MU as they go on to compete in a much more competitive and more respected league, leaving KU back in "middle school" so to speak in the lowly Big 12.
You do not have to sign up to comment! If you have any trouble publishing your comment, try hitting the "Preview" button to publish from there. Thanks you from Kansas City News!
at 7:15 PM