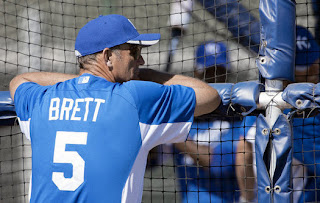 George Brett has been named the ambassador for the 2012 Major League Baseball All-Star Summer. Brett, one of the most decorated players in Kansas City Royals history, will participate in several events leading up to the All-Star game.

Brett will headline the MLB All-Star FanFest from July 6-10 and will manage the United States’ team in the All-Star futures game on July 8. This will be the hall of famer’s second appearance as team USA’s manager. He will also play in the Taco Bell All-Star Legends & Celebrity Softball Game on July 8 and will serve as the official race starter for the MLB All-Star Game Charity 5K & Fun Run.

With the 2012 All-Star game taking place in Kansas City, there is no better representative the Royals could have selected than Brett. The baseball legend spent his entire 21 year career with Kansas City, and is a great representative of an era when the Royals contended for championships and weren’t viewed as a bottom feeder. The All-Star game and the week’s festivities will give Kansas City the opportunity to showcase some of the club’s biggest heroes, and Brett certainly fits that bill.

To see a full schedule of the events being held during All-Star week in Kansas City, please click here.

Does anyone know if George Brett will be playing in the celebrity all star soft ball game? Or if the line up has been set for that game yet?

I don't think that they have announced who will be playing in the game on Sunday, but Brett will most likely be playing. It will be good to see that old batting stance at home plate again! The Royals haven't had a player as good as Brett since 1985.