Royals Beat Yankees For Their First Home Win Of The Season 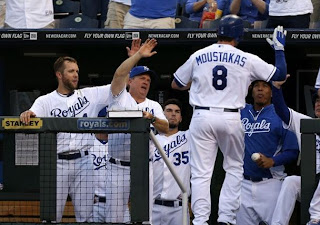 As sad as it is that it came in May, the Royals won their first home game of the season last night, beating the New York Yankees 4-3. The Royals were able to hold on in ninth thanks to a fantastic play at third base by Mike Moustakas, who made a bare-handed grab to throw at Alex Rodriquez to end the game. The win improved the Royals’ record to 8-16 on the season.

Moustakas also contributed at the plate, belting a solo shot in the second inning to give the Royals an early lead, and adding two more RBIs in the fifth. The young third baseman is silently having a very good season for the Royals, hitting for a .318 average this season with 4 home runs and 15 RBIs. He has also played excellent defense at third base, and last night’s game winning throw was just one of several highlight-reel plays he has made at third base this season.

Danny Duffy pitched very well for Kansas City, and improved his record to 2-2 on the season while lowering his ERA to 3.57. The Royals bullpen was solid, save for a shaky outing from closer Jonathan Broxton. Broxton gave up a hit and a walk before a big double play got Kansas City closer to victory.

The big story before the game was New York’s loss of Mariano Rivera, who tore his ACL before the game shagging balls and may be done for his career. Rivera is the greatest closer in MLB history, and his absence surely played a part on the Yankee’s struggles. However, give a lot of credit to Kansas City, the Royals deserved the win and got the winless-at-home monkey off their back.