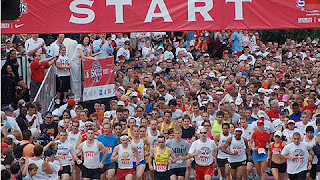 After a one year hiatus, the All-Star Game Charity 5K and Fun Run will return to the 2012 MLB All-Star game held in Kansas City. The event was canceled in Phoenix last year due to extreme temperatures, but was a big success previously in Anaheim and St. Louis.

The 5K race will start at 7:30, while the one mile fun run will start thirty minutes later. Registration now includes an early price of $25 (adult) and $20 (under-13) for the 5K and $20 (adult) and $15 (under-13) for the Fun Run. Space is limited so participants are encouraged to sign up early. Registration and event information can be found here.

All proceeds from the event will be donated to the Prostate Cancer Foundation, Stand Up To Cancer and Susan G. Komen for the Cure. Participants will run and walk on an All-Star themed course which will feature appearances by MLB legends, mascots and celebrity guests.

The Royals begin a long home stand tonight, when the team begins its series against the New York Yankees. After a 12 game losing streak, Kansas City has won four of its last seven games, including a thrilling 3-2 victory over Detroit last night.