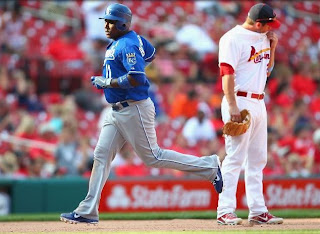 Yuniesky Betancourt blasted a two-run home run in the 15th, giving the Royals a 5-3 victory over the St. Louis Cardinals. The win improved Kansas City’s record to 29-35 on the season, and the Royals have now won five of their last six games and trail the Chicago White Sox by only five games in the AL Central standings.

Betancourt wound up the hero, despite not even starting the game. He was forced into action when Chris Getz suffered a leg injury in the first inning. Betancourt nearly ended the game in the fourteenth inning, when his RBI double gave Kansas City a 3-2 lead. However, Jonathan Broxton blew the save and the game continued.

Before Betancourt’s heroics, Billy Butler had the game’s biggest hit. Butler hit a pinch-hit home run to tie the game in the ninth inning, his 12th blast of the season. Kansas City also got a bizarre contribution from Alex Gordon, who drew a franchise record five walks in the game. Gordon has now drawn five walks in a game twice, the only Royal in club history to achieve this feat.

While Betancourt and Butler stole the headlines with their homers, Kansas City would not have been in the game if it wasn’t for some strong pitching. Luis Mendoza pitched six strong innings, only allowing two runs while striking out five and only allowing one walk. The Royals’ bullpen also pitched well, as the Cardinals did not record a run between the sixth and fourteenth inning.

The Royals continue their interleague schedule tonight, when they will travel to Houston to begin a series with the Astros. Jonathan Sanchez (1-2) will start for Kansas City, while J.A. Happ (4-7) will start for Houston. The Royals have won seven of their last ten games against the Astros.

Hey, let's give the boys in blue some credit. For the Royals to even be near the top of the division is a beautiful thing. I spilled my popcorn last night when Betancourt hit that dinger. Go Royals!

Congratulations to our Royals, kick those red birds in the nuts.

The Royals got so lucky in this game. I'm still sick from watching it. I want that three hours of my life back! Friggin Royals, I didn't even know that Kansas City still had a team, didn't they move on to Oakland or something?