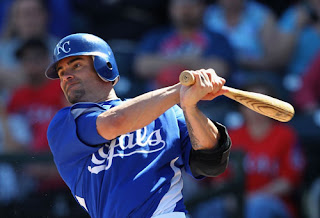 On one of the hottest days of the year, the Royals had absolutely no answer for the red-hot Felix Hernandez, only producing one run in a 6-1 loss to the Mariners yesterday. The loss means that despite an easy post All Star break schedule, the team has yet to win a series since play resumed.

Hernandez worked through the eighth, only allowing a run when Chris Getz hit a single in the 5th to drive home Eric Hosmer. The Royals had a great chance to get back into the game in the eighth inning, when the team loaded the bases with only one out. Hernandez, who leads the league in strikeouts, fanned Alcides Escobar and got Billy Butler to ground out, ending any hope the Royals had for a comeback.

Seattle’s offense was led by Jesus Montero, who homered and drove in four runs of rookie Will Smith. Smith had pitched well in Triple-A Omaha before being called up due to the struggles the Royals have had in the bullpen, and despite his poor performance yesterday, he will likely get several more chances to earn a permanent spot in the rotation.

The Royals were busy making some deals as well, most notably their resigning of catcher Jason Kendall to a minor league contract. Kendall played for Kansas City in 2010 before missing all of 2011 due to injury. At 38, it is hard to imagine that Kendall has much left in the tank, but he played well for the team in 2010 and is a former three-time All Star. If the injury bug that has bitten the Royals pitching staff hits Kansas City’s offense, we may very well see Kendall called up sometime before the season ends.