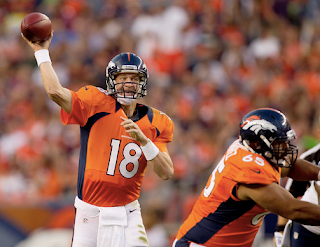 The Chiefs’ disaster of a season will keep rolling along on Sunday, as Kansas City will host its arch rival, the Denver Broncos. Kickoff for the game is 12:00 p.m.


This game will feature two teams headed in completely opposite directions. The Broncos had a shaky start, but have since caught fire and sit atop the AFC West with a 7-3 record. Peyton Manning has turned into his old self, enjoying a fantastic season that has him in the NFL MVP discussion, and the defense is playing well led by linebacker Von Miller. The only thing that might slow Denver down is the loss of running back Willis McGahee, however the Broncos have several other capable backs on the roster.

The Chiefs offense is only averaging 15 points per game, and they face a tough matchup on Sunday against a Bronco defense that has become one of the better units in the league. Miller has 7 sacks in his last three games, and the team leads the NFL with 35 sacks this season. This is all bad news for Brady Quinn, who was recently named the Chiefs starter. The Chiefs have given up 10 sacks in their last four games, and injuries to Kansas City’s offensive line means Miller and company might be living in the Chiefs backfield on Sunday.

The only way the Chiefs will have a shot in this one is if they can force some turnovers from Manning and sustain some long drives with their run game. Jamaal Charles is quietly having a very good season, and he will have to play lights out for the Chiefs to have a chance. With Manning in a groove and Denver’s defense playing well, this has all the makings of a blowout. Still, you never know what will happen in a rivalry game.