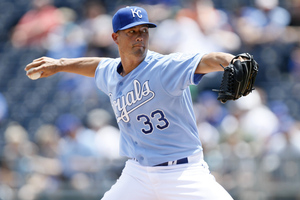 The Royals have already made several moves this offseason, but recently the team has made some big decisions that will significantly shape next year’s roster. The biggest deal came yesterday, when the Royals resigned pitcher Jeremy Guthrie to a three year, $25 million deal.

Guthrie resurrected his career with the Royals last season after the club acquired him via a trade with the Colorado Rockies. After struggling a bit early on, Guthrie absolutely caught fire in the second half of the season and became one of the better pitchers in the American League. After joining the Royals, Guthrie posted a 5-3 record with a 3.16 ERA in 16 starts.

While many are concerned with Guthrie’s age (he is 33) and struggles in Colorado, the Royals resigned him for a decent price and showed its fan base that they are serious about contending for a playoff spot next season. Kansas City needed to upgrade its starting pitching, and with deals to Guthrie and Ervin Santana, as well as the return of Felipe Paulino and Danny Duffy from injury, the Royals suddenly have what appears to be a solid starting rotation. This rotation, paired with several key offensive players entering the prime of their career, should have Royals fans somewhat optimistic about next season.

Kansas City also was forced to remove several players from its 40 man roster, and a few have surprised Royals fans. Bryan Pena was let go after spending the last four seasons as the team’s backup catcher. The backup catching job now belongs to Brett Hayes, whom the Royals claimed off of waivers on November 2. Hayes is only 28 and is known to be a good defensive catcher who also calls a good game.