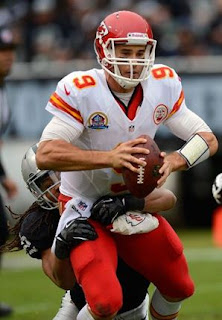 Despite playing the lowly Raiders on Sunday, the Chiefs yet again got embarrassed on the field, getting shut out 15-0. The loss now means that the Chiefs are one step closer towards acquiring the top overall pick in the 2013 NFL draft.

There really isn’t much to be said about Kansas City’s performance on Saturday. Opposing teams know that if Jamaal Charles is contained, the Chiefs have absolutely no shot of scoring many points on offense. The Chiefs only offensive weapon was held to 10 yards on nine carries, and Brady Quinn couldn’t get anything going with a group of young, unproven receivers. While the defense did a good job of keeping Oakland out of the end zone, this one never really felt in doubt.

It is time for Chiefs fans to look ahead to next season, and that starts with the 2013 NFL draft. Currently, the team is tied with the Jacksonville Jaguars for the worst record in football at 2-12. Philadelphia and Detroit are the next two teams in regards to fewest total wins, but both have four wins on the season. It appears that the race for the top pick in 2013 NFL draft is now solely between Kansas City and Jacksonville, and with both tied at the moment in regards to record, it is important to examine the NFL’s tiebreakers for draft order. Tiebreakers for draft order regarding teams with an identical record go in this order:

First, let’s examine the remaining games for both teams. The Chiefs finish against the Colts and the Broncos, two teams that are vastly superior to Kansas City. The Colts will be fighting for a playoff spot, and the Broncos may be playing for a first round bye.The Jags play the Patriots next week, which is all but a guaranteed loss, but will get the lowly Tennessee Titans in its season finale. The Jags already beat Tennessee this season, and the Titans won’t be playing for anything. The odds of Jacksonville winning one of its final games has to be higher than Kansas City’s.

At this moment, Kansas City owns all of the tiebreakers and is in the driver’s seat for the top overall pick. If Kansas City drops its next two games, it will be picking first in the 2013 NFL draft.

Finally a first round draft pick! It will be interesting to see what we do with it. A lot of us are joking that The Chiefs will "invent" a position to draft, like "With the first pick of the 2013 NFL Draft, The Kansas City Chiefs select John Doe, a Punt Backer from the University of Mississippi" or something like that, haha!