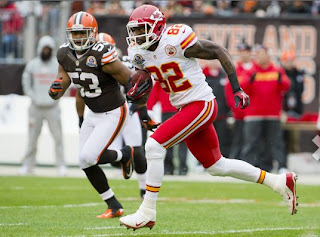 Chiefs WR Dwayne Bowe left Sunday’s game against the Browns with a rib injury, and now appears to be out for the season. Bowe finished the season with 59 catches for 801 yards and three touchdowns, respectable numbers considering the struggles the team had with its quarterback play. The question now is this: Has Bowe played his last game as a Kansas City Chief?

All signs point towards the answer of this question being “yes.” Bowe’s relationship with the organization went south this offseason, when the team refused to sign him to a long-term contract and placed the franchise tag on him. As a result, Bowe held out during the preseason, and did not sign his franchise tender until the regular season was about to begin.

Bowe is a free agent at the end of the season, and most speculate that he will try to sign with a winning team. Not only does Bowe want to play for a winner, he will want a long-term deal and a lucrative contract similar to what other top receivers in the league are getting.

What is disappointing for Chiefs fans is that Bowe may potentially walk and the team will get no compensation for him. It was reported earlier this season that Bowe was pushing for a trade out of Kansas City, and there were several teams interested in his services. The team should have dealt Bowe to a team desperate for a WR and gotten a valuable draft pick back in return, especially since it was apparent after only a few weeks this season that the team was heading towards a terrible record.