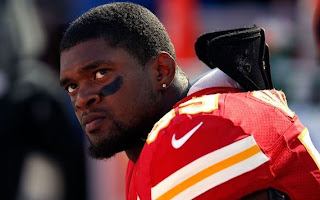 The Kansas City police have released several of the 911 tapes from the morning of Jovan Belcher’s murder suicide, and a more accurate story of Belcher’s hours before the shooting has emerged.

Belcher’s mother, Cheryl Shepherd, called 911 immediately after Belcher fatally shot his girlfriend, Kasandra Perkins, who was also the mother to the couple’s three-month-old daughter. Perkins was still alive when Shepherd called 911, as Belcher’s mother can be heard pleading with her in the tape to remain alive. Shepherd then told dispatchers that Perkins was bleeding and barely awake, but moved when she spoke to her. By the time paramedics arrived on the scene, Perkins has succumbed to the multiple gunshot wounds.

Another twist in this horrific story is that Belcher had an encounter with police only hours before the shooting took place, at an apartment complex that he noted was the residence “of his girlfriend.” Police responded to a report around 2:50 a.m. of a man sleeping in his car outside the apartment building. Belcher got out of the car when the police approached him, and was cooperative with the officers. He told police that he was there to visit his girlfriend, but she wasn’t home. Belcher then called the woman, thanked the officers, and was let into the apartment complex by the woman. It is unknown at this time who this woman is, as she was not questioned by the police as Belcher was cooperative and did not appear to be any threat at this time.

According to witnesses, Belcher stayed at the apartment until 6:30 a.m., a mere hour and twenty minutes before police were called after he shot Perkins and headed to Arrowhead Stadium to take his own life.