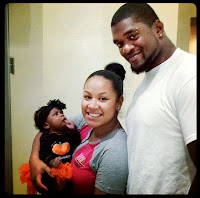 Due to the release of several police reports, more details are emerging from the murder-suicide of former Chiefs linebacker Jovan Belcher. Belcher shot and killed his girlfriend, Kasandra Perkins, early on Saturday morning, before driving to Arrowhead Stadium and taking his own life in front of several Chiefs coaches and general manager Scott Pioli.

Belcher’s mom was home during the events that unfolded early Saturday morning, and her testimony has given us a better idea of exactly what happened. According to her reports, Belcher and Perkins had been arguing for months, and things got heated when she returned home late after a concert on Friday night. Belcher then shot Perkins, kissed her on the forehead and said he was sorry. He then apologized to his mother, kissed his three-month-old daughter goodbye, and headed towards the Chiefs training facility.

In the parking lot outside the Chiefs stadium, Belcher ran into GM Scott Pioli. Belcher apparently stepped out of his car with his gun already pointed to his head, immediately telling Pioli what he had done. Belcher thanked Pioli for what he had done for him, and then asked Pioli and to take care of his daughter.

Later, head coach Romeo Crennel and linebacker coach Gary Gibbs approached Belcher, and joined Pioli in trying to convince Belcher to put his weapon down. When Belcher heard the sirens of the police cars approaching, he knelt down beside a vehicle, made the sign of the cross, and fired his gun.

The Chiefs organization had already been made aware of the problems between Belcher and Perkins, and had been providing counseling and other assistance to the couple to try and help them sort out their problems.

Police are not sure if alcohol played a factor or not in the shooting, as toxicology tests are currently being performed on both Perkins and Belcher. It now appears that Belcher shot Perkins in the heat of an intense argument between the couple, and then ended his life when he realized the ramifications of what he had done.

Jesus, this is just terrible. I'm sorry, but we're just going to have to take a good look at the easy availability of guns in our city. It sounds like the same old story when I say it, but seriously, we really need to look at the issue in depth. I mean, you can just walk into a store and buy a gun in Missouri, no waiting period! That just can't be a good thing. There's no definitive answer for this case, but the gun thing has to be addressed.