TCU Shocks Kansas In Biggest Upset Of The Year

It will go down as the biggest upset this season in college basketball and the worst loss a Bill Self Kansas team has ever suffered. Last night, the Kansas Jayhawks were shockingly upset by TCU in Fort Worth, 62-55. 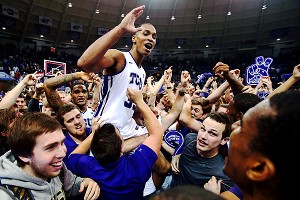 After a rare loss at home to Oklahoma State, most thought that Kansas would come out fired up against TCU. It didn’t happen, as the Jayhawks only scored an embarrassing 13 points in the first half. The Jayhawks only shot 30 percent from the field, including a horrific 3 of 22 from beyond the arc. Efficient scorers Jeff Withey and Travis Releford didn’t get many shots, while reserve point guard Naadir Tharpe attempted 15. Worst of all, struggling point guard Elijah Johnson continued to play terrible basketball, once again missing shots while turning the ball over at will.


To sum this loss up as “shocking” would be putting it too lightly. In terms of RPI, this was the biggest upset in the last 20 years of college basketball. The Jayhawks, who have knocked off top teams like Ohio State and Kansas State on the road, looked outclassed from the beginning against TCU. With two straight losses, it may be panic time in Lawrence if the Jayhawks can’t get out of their funk.


The loss also had a huge impact on the league race, as the Big 12 is now wide open. Kansas and Kansas State are tied for first, while suddenly red-hot Oklahoma State sits only one game behind. The Jayhawks will need to regroup quickly, as they have two tough games coming up – a road contest against Oklahoma and home against KSU. If Kansas can win these two games, it will once again be in the driver’s seat for a ninth straight Big 12 title. However, after last night, that is looking like a slim possibility.