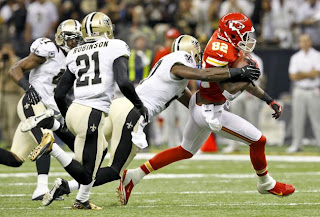 The Chiefs were able to pick up a huge win in New Orleans on Sunday, saving their season and cooling the frustrations of a heated fan base. However, the win came with a big price, as Kansas City lost several players due to injury during the New Orleans game.

Dexter McCluster, Peyton Hillis and Rodney Hudson all left Sunday’s game with an injury, and head coach Romeo Crennel indicated that at this point, he is unsure if any of the three will be able to play this Sunday. McCluster left the game in the second half with an elbow injury, Hillis has an injured ankle, and Hudson has injured his knee.

McCluster has been a pleasant surprise for the Chiefs this season, posting 13 receptions and often finding ways to move the chains with his quickness and speed. What hurts the Chiefs is they have no one who can replace McCluster’s role – Dwayne Bowe and Jonathan Baldwin are bigger, downfield threats and Steve Breaston is more of a possession receiver. Rookie Devon Wylie was supposed to be used in a similar role as McCluster; however he has been hurt most of this season and is not ready for playing time.

Hillis’ injury likely means more playing time for Shaun Draughn, as the team needs to limit the carries of Jamaal Charles. Charles had 39 touches against the Saints, far too many for an explosive back recovering from a serious knee injury. Hillis was signed to be a bruising, between the tackles runner who could give the Chiefs a change of pace from the dynamic Charles and take some of the work load off of him. Draughn had a solid preseason and has looked pretty good so far in a backup role this year.

Hudson, the team’s starting center, was replaced by Ryan Lilja. Lilja normally starts at guard, and was replaced by rookie Jeff Allen after assuming the center duties. To address depth concerns, the team signed offensive lineman Russ Hochstein this week.

This trio of hurt Chiefs join three others on the sideline – safety Kendrick Lewis, nose tackle Anthony Toribio and tight end Kevin Boss. It is still unclear if any of these players will be able to return for Sunday’s game against the San Diego Chargers.

Injuries are a part of the NFL, but the Chiefs’ already had some serious depth concerns before losing McCluster, Hillis and Draughn. Some young players are going to have to step up and fill the void if the Chiefs are to pull off another upset and beat the Chargers this weekend.