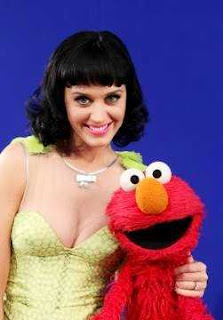 Children's show Sesame Street is known for many things, one being celebrity appearances. Every week, a sports star, actor, or even a politician helps kids learn their ABCs and how to count. Katy Perry was slated to be just another star who helped your kids learn, until the network rejected the footage it filmed of Perry and Elmo.

After posting a video of the pop star and beloved muppet singing Perry's hit "Hot n' Cold" on its youtube site, Sesame Street was immediately bombarded with comments, both positive and negative, about Perry's dress. It was deemed a little too revealing by most, and now the show has decided to cancel airing it on New Year's Eve like it originally planned.

While parents over-reacting is nothing new, it seems like Sesame Street could have avoided this whole mess by simply giving Perry something less adult to wear. Was everyone on the set blind, stupid or just ignorant? People get paid a lot more money than I do to make sure that Sesame Street stays appropriate for its audience, where were they when this was being filmed, edited and uploaded to the web? I have no idea, but maybe this whole situation was a secret attempt for the show to gain a more mature audience.
at 12:45 PM No comments: