A dominant pitching performance by Luke Hochevar wasn't enough, as the Royals' offense couldn't get anything going all night against Rays starter Jeremy Hellickson. Kansas City ended up on the wrong end of a pitchers' dual, losing 2-1.

Hochevar, who had won his previous three starts, certainly pitched well enough to earn another victory last night. He pitched seven strong innings, only giving up one run and five hits while striking out seven. After falling to 4-8 earlier in the year, Hochevar has been downright dominant for the Royals lately. It appears the light may have finally come on for the former top overall pick.

Early in the game, it appeared that Kansas City's offense was poised to put up some big numbers against Hellickson. Alex Gordon lead off the game with a double, and scored on Eric Hosmer's bloop single. The Royals would have plenty of chances to add to their lead later in the game, but failed to drive in several runners in scoring position.

Royals Drop Game One of Series vs. Diamondbacks 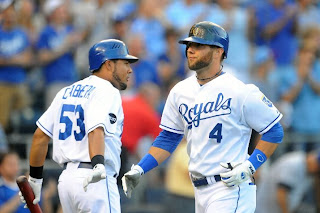 The big story from the game was Pena, who has bounced around the minor leagues for the past couple of seasons. Predictably, he broke the game open with a home run with two outs in the fifth inning. Before Pena's blast, Hochevar had only given up one hit, and appeared to be cruising towards a rare victory. The Royals former first-overall draft pick has made a bad habit of pitching well for several innings, then imploding later in the game. It is his flashes of dominance that make him so frustrating, just when it looks like he is in control, he gives up five runs in an inning and the game is over.

The lone bright spot offensively for Kansas City was Alex Gordon, who fell a single shy of hitting for the cycle. Gordon's homerun and triple accounted for the Royals' only runs, and the young outfielder has raised his average to .287 for the season. Kansas City fans had waited patiently for Gordon to break out, and the former Nebraska star seems to finally be putting it all together.

Kansas City hosts the Diamondbacks again tonight at 7:10 p.m. Jeff Francis (3-7) will get the start for the Royals.
at 12:52 PM No comments: 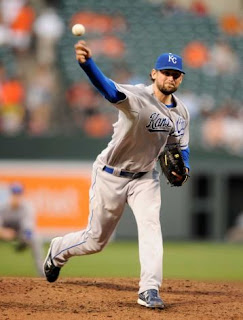 Just one night after blowing a ninth inning lead, the Royals established early on that they had no chance in this one. The Orioles scored eight runs in the fourth inning, and went on to humiliate Kansas City 9-2. The pitching meltdown in this game came courtesy of Luke Hochevar, who dropped to 3-5 on the year.

While Hochevar, the team's number one starter, was getting lit up like the fourth of July, former Royal Zack Grienke pitched lights out in Milwaukee. Grienke struck out 10 batters in his seven innings of work, while also blasting a home run. Looks like the former Cy Young winner is joining a long list of former Royals that went on to do great things once they left Kansas City.

Kansas City's offense has been fairly good this season, but the only way the Royals were going to compete this year was if the pitching could hold up. Not only have the starters struggled, but former All-Star closer Joakim Soria has been a disaster recently. At least Royals fans can remain optimistic that Soria will return to form and get back to being one of the best pitchers in the AL. Hochevar, a former number one overall pick, has never lived up to his draft status, and is once again turning in a crappy season for KC. It is hard to watch the Royals' former top pick get shelled while Grienke enjoys success in Milwaukee.
at 12:26 PM No comments: