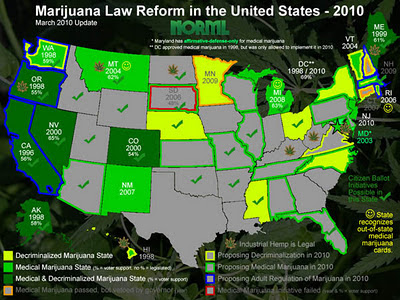 That's OK, Kansas City, we know that we are usually in the back of the pack when it comes to making changes or modernizing our city in any way. Rumors have surfaced once again that marijuana could become legal in Kansas City pending a few small hurdles. The latest rumor is that the state of Missouri is trying to legalize marijuana for those who are 21 and over. This would mean that it would be legal for legal citizens of Missouri to possess and use marijuana. It would obviously still be illegal for anyone to drive while under the influence of marijuana, but we're not sure on what the law would be pertaining to having marijuana on your person while driving, but not under the influence. It would be legal for anyone 21 and over for possess, purchase and use marijuana with basically the same applicable laws as alcohol.

This is NOT the same law as the "medical marijuana" law that has passed in other states, although Missouri is considering that law as well. For now, the state of Missouri is only focusing on making marijuana legal and like alcohol, only available for sale to those 21 and over. We're not sure where they would sell the marijuana, but it would no doubt be government controlled and operated in order for the state to make the most tax profits from the sale of the marijuana. Private merchants will probably be able to sell marijuana if they purchase a license to sell marijuana, which will no doubt be VERY expensive and probably require a thorough background check, etc. The state of Missouri isn't just going to hand out licenses to grow and sell pot without making you pay through the nose for a permit / license. As far as personally growing your own marijuana, you would probably have to have a permit for that as well, otherwise it would still be illegal.

It looks like we're getting close to legalizing marijuana across the board, but the government has to make sure that they have their hands in it and can make as much money as they can from the cultivation and sales through taxation. As we stand right now, Missouri has to obtain 140,000 signatures to propose the legalization of marijuana in Missouri, then the issue would be put to a vote. It is hard to say how Missouri would vote on the legalization of marijuana - remember that a lot of Missouri is still mostly hillbillies who are devout religious freaks and may raise a stink about it.