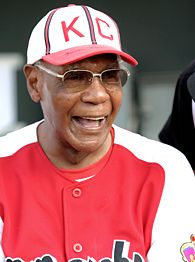 As the MLB All Star Game 2012 gets closer, here at Kansas City News we will keep you updated on all of the events as they happen.  The latest news on the 2012 All Star Game is about a charity fundraiser for the Negro League's Baseball Museum at 18th and Vine.  The Kansas City charity event will be called "Buck, BBQ and Baseball" - Buck for the late Buck O'Neil, BBQ because this event will feature some of The American Royal BBQ Contest's best BBQ, and finally Baseball because a portion of the proceeds from this charity event will go towards the Negro Leagues Baseball Museum.

This Kansas City charity event will be held during one of the biggest weekends that Kansas City has seen, or will see in the future as it is the first time the MLB All Star Game has graced our fair city since 1973.  It is predicted that the MLB All Star Game will bring around $50 Million dollars worth of revenue to Kansas City during that week, most of the revenue going to local Kansas City hotels, and Kansas City restaurants.  So far, the Buck, BBQ and Baseball charity event is going to feature great BBQ, a VIP party that will feature appearances by famous baseball players to be named later, and a performance by Kansas City jazz saxophone legend Darryl Terrell.  The VIP party will be held inside that actual baseball museum itself.  After the VIP party, guests will join together in the main hall of the museum event center and there will be live music by The KC All Stars, winners of KMBC-TV's "Best Band in Kansas City".

The Buck, BBQ and Baseball charity event has already received backing from several community leaders including Senator Roy Blunt, Congressman Emanuel Cleaver and The Negro Leagues Baseball Museum.  The MLB All Star Game film crew will also be shooting footage of the event and the museum itself to use during cutaway shots during the Nationally televised All Star Game events including the Home Run Derby, the Future's Game, the Legends and Celebrity Softball Game, and of course the big day, The MLB All Star Game.