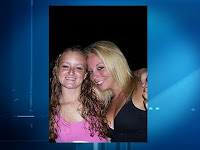 On September 21st, 2007, Palm Bay, Florida teens Jennifer Carty and Ravin Billington were involved in a drunken car wreck that resulted in the death of Ravin Billington. After over 2 years of investigation, it is still impossible to tell exactly which of the teen girls were actually driving the car during the accident. The car belonged to Jennifer Carty, but several of their friends testified that Ravin Billington was often seen driving Jennifer's car. Here's the kicker - Jennifer was knocked unconscious during the wreck, she had a blood alcohol level of .126, and she doesn't remember the accident or, more importantly in this case, who was driving. Jennifer is being charged for DUI Manslaughter by the state of Florida and the case is coming to a close today.

Jennifer Carty and Ravin Billington were partying with two friends in the parking lot of a BP gas station located at 6600 Babcock - apparently the local teen hangout. The girls were drinking and occasionally jumping in pickup trucks with two guy friends to go "mudding" at a nearby swampy area known as BCC Lakes. Surveillance footage from the BP shows the two girls coming and going at different times throughout the night to use the restroom, buy cigarettes, etc. According to evidence and testimony from the BP store clerk, the group of friends remained in the BP parking lot for a short time after midnight and then they left. At approximately 12:45am, one of the guys the girls were with earlier that night, "Tyler", called 911 and reported that while he was driving down Babcock street, a car sped past him, lost control and flipped over several times before eventually landing in a ditch full of water. Tyler ran from his truck towards the car and realized that it belonged to his friend Jennifer Carty. The girls had been thrown from the car and were both lying face down in the ditch, Ravin was approximately 14 feet from the car and Jennifer about 30 feet from the car. Tyler reported that they were both unconscious but breathing. He drug Jennifer from the watery ditch to the nearby curb. Tyler claimed that Ravin was unconscious but still breathing at the time. Jennifer Carty was soon Life-Flighted to a nearby hospital, while Ravin Billington was pronounced dead at the scene.

The trial of the case aired live on TRU tv this week and they are moments away from a verdict. After hearing all of the evidence and witness testimony, it is impossible to tell which of the two girls was driving the car during the wreck. The prosecution even offered up a lesser charge of a normal DUI, almost as if they knew that they did not have enough evidence to convict Jennifer Carty of DUI Manslaughter.

One thing is for sure, defense attorney Meriah Park is not someone you would ever want to hire. Meriah Park's questioning of the witnesses was stuttery, cluttered and often confusing to the witnesses as you watched them lean forward and wince to understand what the heck she was talking about. Long pauses, and just outright clumsy questioning made some of the witnesses quite irritated. In her closing statements she sounded like an overly righteous kindergarten teacher, speaking to the jury as if they were 4 year olds - almost SCOLDING them. She was swaying back and forth at the podium, and delivered blustering babble while flushed with far too much female hormone-induced emotion. Luckily for Jennifer Carty this case pretty much solved itself as the prosecution clearly didn't have enough evidence, because if Jennifer were relying on Meriah Park to save her case she would be behind bars.

When the word wants to know the full truth of what happen that night you can contact the Billington's to share the full story and secrets that Palm Bay hides.

This is a very sad case indeed. I do think that the parents on both sides have a great deal of responsibility in this matter. These girls were underage, driving and drinking and obviously hanging out until early morning hours without any parental supervision. The tragedy might have been avoided if the parents spent as much time supervising their "children"as they have pointing blame at each other.

Tragedy on all levels which could have been avoided in many ways! Each of the parents needs to assume responsibilty for this tragedy. The jury got the verdict correct in this case, our justice system is not without flaws however it still remains the best the world over. We as a society never want to place anyone behind bars until proven guilty beyond a reasonable doubt. This case had plenty of reasonable doubt when even the most skilled investigators could not be sure whom was behind the wheel. The one thing that is certain is the lack of parenting involved on behalf of both sets of parents. This was not the first time these girls drank alcohol but for some reason a blind eye was turned and no resposibilty was taken by either of the parents to make changes. I am deeply saddened that these girls were failed in so many ways but to label them as victims is wrong. They both were old enough to appreciate the ramifications of their illegal behavior and still chose to engage themselves. I am truly greatful that no truly innocent party was injured or killed in this accident. Unfortunately this case will not make much difference in stopping teen deaths resulting from alcohol involvement.

I know Jenn and knew Ravin. I know for a fact Jenn was driving. She didn't start denying that until cops got involved. I was Myspace friends with her and right after the accident she posted messages about how she killed her best friend and things like that. Then once there was talk of charges against her she deleted all that stuff as well as all of their drinking pictures. They were very much best friends and Jenn is responsible for her death. She has never fully recovered physically or emotionally. I don't know if I agree with the verdict or not, it's like nothing good can come out of this situation anyway so it is what it is.

The thing that hurt the most was that this accident came just 9 months after three other teens (Kassadi Pullins, Ryan Popovich, and Shane Alveraz) died in a motorcycle accident that involved alcohol. Both Jenn and Ravin were affected by the accident because they were friends with Kass, Pop, and Ryan. They knew things like this could happen to them because it just happened to their other friends earlier that same year. Everyone was really, really hurt once this accident happened because we felt like Kass, Pop, and Ryan died in vain since apparently people didn't learn to not drink and drive from it.

Like I said, nothing good can come from this situation, jail time for Jenn is no exception. She lives with what she did everyday and honestly, I'm surprised she hasn't committed suicide. She struggles with her guilt and she couldn't get help coping with her guilt because of the court case. She looks NOTHING like she did in high school; she was a pretty cheerleader then, now her physical and emotional pain shows by her appearance. She is suffering, but she is responsible for everything.

I knew Ravin before she moved to Florida and we became pretty close fast when she moved to sommerdale/magnolia NJ. I still think about her sometimes as you can tell from me posting this in 2021...