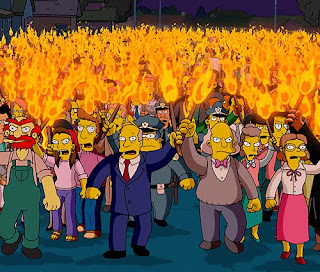 Shawnee Mission School District Superintendent Gene Johnson's plans to close several schools has lead to some redistricting as well. Brookwood Elementary School will now be located in the SM South boundary (Students attending Brookwood will eventual attend South) - currently it is in the SM East region. It also appears that new lines drawn directly through a subdivision has drawn some criticism as well. It would seem obvious to some that a district with shrinking enrollment (and a shrinking budget)must make some tough choices. Population shifts have made previous boundaries obsolete. South currently has 400 fewer students than East. With a disparity like that it is hard to offer equal services among schools.
Some change is required to more evenly distribute students among the high schools. These are always emotionally charged situations for parents when it involves their little babies. One look at the district map would indicate the logic in making the decision they did. The area in the far southeast corner of the district is MUCH closer to South than it is East. Students also would likely be able to finish their high school careers at East if they have already started there.
I contend parents should focus on making this a positive for their kids. What about turning this into an opportunity to meet new people. These kids likely have friends and neighbors that go to several different schools - diversity is a good thing, and these parents are sending the wrong message to their children. Is it OK to find answers to their questions? Sure it is, but the problem is - no answer is good enough for them if it's not the answer they are looking for. After all, there are so many things in this world we have little control over.
at 9:54 AM