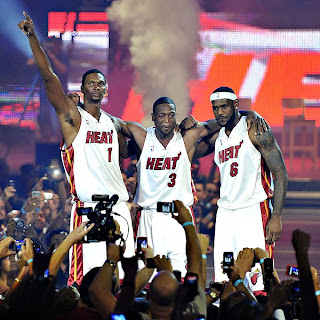 Kansas City will be an NBA town for one night only, as the Miami Heat and Oklahoma City Thunder square off in a preseason contest. The event is sold out with the game starting at 7:30 pm. Doors open at 5:30 when players will begin warming up. Before the game, H&R Block will be hosting a block party in which fans can win last-minute tickets. The party is free.

Lebron James is always a must-see attraction, but even more so now that he stabbed Cleveland in the back and formed a superteam in Miami with Dwayne Wade and Chris Bosh. Love him or hate him, James always puts on a show, and tonight should be no different.

Not only does this game feature the NBA's new possible dynasty, but it also features a team that Kansas City almost had. When moving from Seattle, many thought the Sonics would move to Kansas City. Instead, the Sprint Center was not built fast enough, and Oklahoma City got a talented young team with future MVP Kevin Durant. Kansas City fans can watch both the most hyped team in recent history compete with a talented young team that should have been its own. At the very least, it should be a good game.
at 12:46 PM