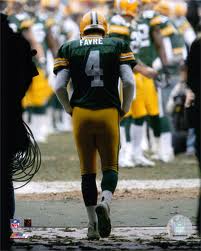 Brett Favre has thrown his last Touchdown pass in the NFL...or interception, or any kind of pass.  Favre's last TD was a short left pass to Percy Harvin  who ran the rock in for a 23 yard score.  Just a few plays later, a crushing hit by Corey Wootton sent Favre to the rock hard surface of the frozen tundra that is The University of Minnesota's TCF Bank Stadium.  It was widely known that several players from the Chicago Bears in particular were concerned about the safety of the frozen field at The University of Minnesota's TCF Bank Stadium, a few players twittered (oh, I HATE that word) their concerns to whatever pathetic losers were actually following someone's frickin' TWITTER account - oh, I guess that's everyone in the media as even Chris Berman was hip to the tweet.  Shoot me now.

Brett Favre retires after several attempts at retirement.  The first time Brett tried to retire The Green Bay Packers offered to pay him 20 million dollars to sit his ass down and retire.  Brett took this as an insult and rebutted by signing on to play for Packer rival the Minnesota Vikings.  The first season went extremely well, with Brett making one of the most spectacular touchdown pass and catch plays in NFL history - but alas, all good things must come to an end and today Brett Favre retires from football for good.  Brett's career stats broke all of the records including consecutive games started (297), and of course interceptions (336).Brett's post game interview tells it all.

Kansas City News is first in KC to land the video footage:

With comments like "you know, my last pass was as exciting as my first pass", we have to assume that Brett Favre is retired.

According to Brett's wife Deanna, he is a lawn nazi and will no doubt take to "greening up the place" back in Ole Miss.  I like to picture him walking off into the sunset like Forest Gump - "Lieutenant Dan says that we got invested in some FRUIT company, and that we don't have to worry about money no more", and of course the classic "mama says that a person only needs so much money to be happy and the rest is just for showin' off".  I will always remember Brett Favre as the 3rd stringer from Atlanta with a gruff old coach Glanville making bets with his friends that Favre could throw a football all the way into the third tier of the stadium.  Brett was often too hung over to participate in the Falcon's practices and was pretty much the coach's whipping boy.  Favre stopped drinking along with his brother, who also gave up drinking at the same time and the rest is history - all the way to his best receiver target in history, Andre Rison and their legendary hook up to win the Superbowl in 1996.

Brett was a thrill to watch on the field as you NEVER knew what he was going to do next, and he will always be a part of the NFL and what it takes to make your mark in that environment.