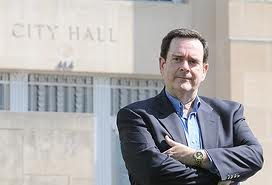 Mike Burke (pictured to the right) and Sly James held their first Mayoral debate, post primary, Tuesday night. They agreed with each other so much that at one point Sly James jokingly accused his opponent of getting answers off his website. Both candidates are currently lawyers in private practice - both made reference to the city being their only "client" if elected. Mike Burke even declined to explain how he would be a different mayor than James. It's enough to make you want to puke.

Mike Burke seems content in letting his endorsements win the race for him. With three ex-mayors and several civic and community leaders endorsing Burke, I think he believes he just needs to keep from doing something stupid in order to win. He may be right. Sly James biggest name endorsement is the Kansas City Star - nobody reads The Star anymore, so I can't see that helping much. Former Mayor Cleaver won't even help a brother out - he has refused to endorse anyone.

I sure do miss Mayor Funkhouser's presence in this race - he sure knows how to stir the puddin'. I predict voter turnout will be embarrassingly low for the March 22nd election. Few people care normally, with these two bores, no one will care. Maybe they should cancel the election and just be co-mayors. Unless something interesting happens, I won't be paying attention.
at 9:37 AM