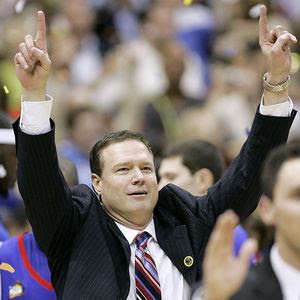 Being a KU fan, I have nothing but respect and admiration for Bill Self. I am grateful that he is the coach of my alma mater and wouldn't trade him for any other coach in America. However, last year's loss to Northern Iowa still stings. This year's tournament could go a long way in shaping Self's present legacy.

Self's success can be hard to define. Apart from his first season, KU has won at least a share of the Big 12 title every year he has been coach, and pretty much dominated the league. However, during that span Self's teams have made only one Final 4, where they beat North Carolina and later Memphis to win the national title.

It is still early, but how do we look at Self? A good coach who, apart from one magical run, always falls short? This criticism seems unfair. Self's teams are almost always one of the tops seeds in the NCAA tournament, and no team is going to crash the Final 4 every year. As a result, KU has been given a "choker" label mostly due to its regular season dominance. However, the tournament results have been a little disappointing. Taking away the national title run, here is how the Jayhawks have done in the tournament:
2004 - 4 seed, Elite 8
2005 - 3 seed, first round
2006 - 4 seed, first round
2007 - 1 seed, Elite 8
2009 - 3 seed, Sweet 16
2010 - 1 seed, second round
The 2004 and 2009 seasons were viewed as successful runs, given that KU had little to no expectations in terms of competing for a championship. While the early exits seem often, lets not forget that every great coach is going to take his lumps. While Roy Williams never lost in the first round in his tenure as KU's coach, his teams lost in the second round five times during his 14 seasons, including three straight from 1998-2000. However, Williams' teams made four Final Fours in his tenure, despite failing to win a national title.

The counter argument to defending Self can be found in Michigan State's Tom Izzo. In Izzo's 15 seasons coaching the Spartans, his teams have six Final 4 appearances. However, like Self, he has one national title.
Does it matter how many times you make a deep run if you ultimately fall short of winning it all? Dean Smith, regarded as one of the greatest coaches in NCAA history, made 11 Final 4's during his 36 year tenure as North Carolina's head coach. His team won the national title twice. A deep run in this year's tournament would help erase some of the bad memories of early exits for KU fans, as necessary or unnecessary as that may be.
at 9:58 AM