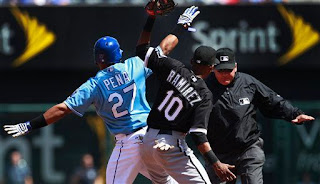 The Royals continue to give fans their money's worth, as nine innings once again was not enough to decide a winner. After winning their first two extended games, the Royals couldn't keep the magic going, falling to the White Sox 10-7.

Joakim Sora, one of the best closers in the league, was to blame for this one. Soria had the White Sox on the ropes - a three run lead with two outs in the ninth - and somehow surrendered four runs and the lead. Soria is one of the best closers in baseball, and this is likely just a rare slip-up from the all-star. When you have a great chance to move to 5-1 on the season and choke like Kansas City did last night, it could be a turning point.

If the Royals begin to lose games and fall apart, this will likely be the game many point at. The Royals' offense has continued to produce, so fans should remain optimistic about the team's chances.

Even the greats have their off days, Soria will get on track soon! I'm just glad that we've managed to win a few this year.