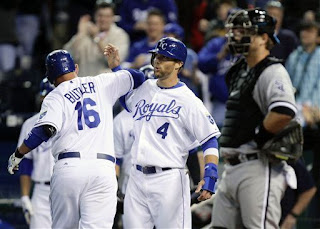 The first place Royals (no that is not a misprint) won its second consecutive thriller, beating the White Sox 7-6 in extra innings. This is the second straight win for the Royals in extra innings, as Kansas City came back to beat the Angels on Sunday.

The Royals have now won four straight games for the first time since September of 2009. The team has used some late-game magic in all four of its wins - and its only loss came when an Alex Gordon blast fell just inches short of a game-winning home run. The Royals' late-game heroics should have relief pitchers and closers around the league terrified, as this team has proved it will go down swinging every night.

This time, Melky Cabrera was the hero, singling home Chris Getz to give Kansas City another walkoff win. The Royals' offense is producing, with new players such as Cabrera and Matt Treanor mixing well with Billy Butler (on pace for another strong season) and Alex Gordon (finally playing like the player we thought he could be).

This feels a bit like the 2003 season, the last time the Royals finished with a winning record. That year, Kansas City had an endless supply of late-game heroics and breakout seasons from several players. While still early, the Royals start may signal that the team could be ready to contend sooner than most expected.