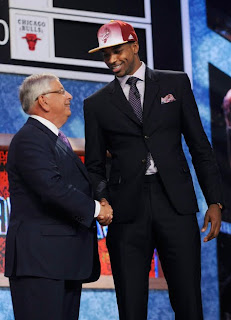 The 2011 NBA draft took place last night, and as expected, five Big 12 players were drafted in the first round. Tristan Thompson, forward from Texas, was the first Big 12 player to be selected. Thompson went fourth to the Cleveland Cavaliers. Colorado guard Alec Burks was selected 12th by the Utah Jazz.

One of the biggest stories from the draft was the back-to-back selections of Marcus and Markieff Morris. Most pundits considered Marcus, last season's Big 12 Player of the Year, to be the better player and more NBA ready. However, Markieff ended up being selected before Marcus, going 13th to the Phoenix Suns. Marcus was drafted next by the Houston Rockets. Markieff has a more natural NBA position, being a true power forward, while Marcus is considered more of a "tweener." Interestingly, Markieff was born seven minutes ahead of Marcus, and was also drafted seven minutes ahead of his twin brother.

Texas' Jordan Hamilton was the last Big 12 player to go in the first round, falling all the way to the NBA champion Dallas Mavericks at 26. Hamilton got a nice shot in towards his former coach Rick Barnes, showing some of the turnmoil that took place in Austin last season. Despite some alleged personality problems, Hamilton was once projected as a top ten pick, and could be an absolute steal for the Mavericks.
at 11:56 AM