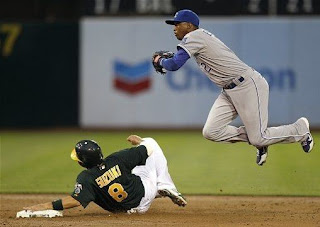 For the second time this season, the Royals’ offense failed to put a run on the board, and Kansas City fell to Oakland 1-0 last night. The Royals had absolutely no answer for Tommy Milone, who threw eight scoreless innings while only surrendering three hits. The loss dropped the Royals record to 2-2 on the season.

The embarrassing offensive output wasted a great outing from Luis Mendoza, who pitched 5 2/3rds innings and only gave up one run on five hits. Mendoza had a fantastic spring, compiling a 4-0 record and a 0.47 ERA in exhibition play, and hopefully this is a sign of things to come for the journeyman the Royals are counting on this year.

While early, it has been hard to figure out the Royals this season. The offense has looked great in the team’s two wins, and dreadful in Kansas City’s two losses. One constant so far has been starting pitching – the Royals starters have all pitched extremely well. With a young and talented lineup, the Royals offense should start to find some consistency. The big question mark entering the season was the starting rotation, and so far, the Royals’ rotation has looked good.

With Kansas City hosting the 2012 All Star game and young stars like Eric Hosmer, there has been a lot of buzz surrounding the Royals early in the season. With an easy early schedule, the Royals have a great chance to build some momentum and live up to the early hype.