Ben McLemore Returns To Practice, Will Play Saturday For Kansas 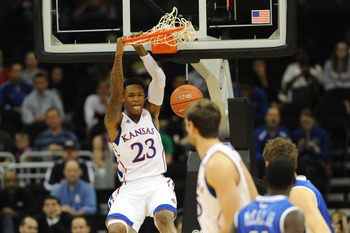 Kansas fans can breathe a huge sigh of relief, as freshman guard Ben McLemore has fully returned to practice and expects to be close to 100% when the No. 4 Jayhawks travel to Austin to face the Texas Longhorns on Saturday. McLemore had rolled his ankle late in KU’s blowout win over Baylor on Monday night, suffering a mild ankle sprain that initially looked very serious.

McLemore has been one of the best players in the country this season, averaging 16.4 points per game while shooting 50% overall and 44% from three. The redshirt freshman is expected to be one of the top players selected in the 2013 NBA draft, and has been one of the biggest reasons why Kansas is a heavy favorite to win its ninth straight Big 12 title and make a second-consecutive Final Four.

McLemore’s return is also critical due to KU’s upcoming schedule. After traveling to Austin on Saturday, the Jayhawks will travel to Manhattan to play No. 16 Kansas State before hosting Oklahoma next Saturday. Like Kansas, K-State and Oklahoma are both undefeated in Big 12 play so far. If Kansas can win those games, it may have an insurmountable lead in the Big 12 race.

Around the Big 12, there are several other interesting matchups this weekend. K-State and Oklahoma will face off in Manhattan, as both teams will look to remain undefeated in conference play. The Sooners beat the Wildcats twice last season, and could make a serious push for an NCAA tournament berth with a big upset over KSU on the road. Oklahoma State, the team many thought would finish second to Kansas in the Big 12 standings, will try to rebound from two early conference losses as they host struggling Texas Tech. Also, watch out for Iowa State – after losing to Kansas in overtime to start Big 12 play, the Cyclones have looked impressive in two straight league wins. ISU will visit league-worst TCU tomorrow.