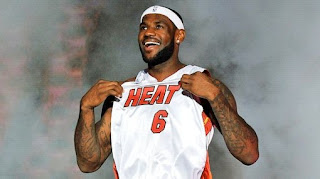 While the ad does a good job of juggling both a sincere LeBron with the joking, fun-loving star we have seen in years, it fails to address why James has become so unpopular. It wasn't so much the decision James made, it was how he did it: using national TV and staging his back-stabbing of Cleveland in a Boys' and Girls' Club building. In the add LeBron asks "should I become a Villian?" and at this point, it might not be a bad idea.
at 8:00 AM No comments: