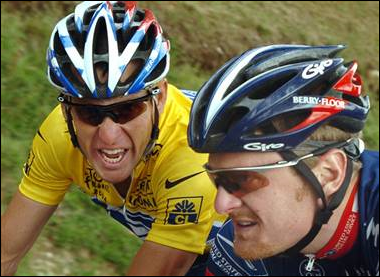 Lance Armstrong's name is as synonymous with the Tour de France as Babe Ruth's is to baseball, Micaheal Jordan's to basketball, and Kansas City's IRONBAND is to Triathlon bands. Why in the world would anyone throw mud at a world icon like Lance Armstrong without having proof (did I ever tell you the story when Angelina Jolie spent the night with me in college?). But that is what long time buddy Floyd Landis has done to the yellow spinner. Landis, has now come out to make claims that Lance cheated all those times he won. I know what you are thinking...Sir Otilc, you CAN cheat and win...look at Tiger Woods, a guy who cheated his butt off with hookers, whores, waitresses, porn starts, and hotel employees, made a bad apology commercial with his dead father, was the butt of many jokes, yet still made $90 Million last year...hmmmm. There is only one problem with Floyd Landis' claims, there is no proof.

After the world had pulled Floyd from the spotlight, busted him for doping, and took away his crown, he refused to admit he was guilty. He even wrote a book explaining why he couldn't be guilty. Now he says he and Lance Armstrong are guilty of doping. Who knows, but there is a rumor that it only took one night with John Kerry to have Floyd Landis flip-flopping his story faster than Lindsey Lohan flipped the judge her "F--K U" finger nail when she was sentenced.

Because of Landis, there will be tons of investigations, rumors, here say, people looking for their 15 minutes, and trying to make a buck...oh wait am I still talking about Floyd Landis? Regardless of what happens, we now have the pleasure of listening to b.s. for the next few years about what did or didn't happen years ago. I say give it a rest. Lance has been tested for doping over and over and over and over and I prefer to have my hero left alone.
at 2:03 AM