Tiger Woods' Struggles: Will He Ever Get "It" Back? 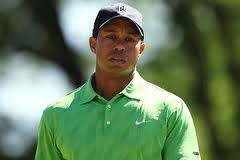 Tiger Woods used to be the best golfer on tour. He used to be dominant. No really, he was, I promise. The golfer was supposed to be returning to form at Bridgestone Invitational, an event he has dominated in the past. However, Woods currently sits at 75th place, prompting the question of when, if ever, is he going to get "it" back.
By now the crazy events of Woods' car accident and infidelities seem like ancient history. After the media storm died down and Woods left sex rehab, he returned to the sport that he had dominated since a teen. Woods actually started out right where he left off, placing fourth at the Masters and seemingly prepared to catapult back to the top. However, Woods seems to be heading backwards, and now he is struggling at an event that used to be more news worthy when he didn't win.
Perhaps Woods still hasn't gotten over the personal drama he dealt with last fall, or perhaps he is still shaking off the cobwebs after spending time away from the course. At this point though, asking if Woods will ever return to form is a serious question. The sport needs Woods to be successful, however given Woods' latest results, that wait could be longer than anyone expected.
Comments?
at 6:13 PM