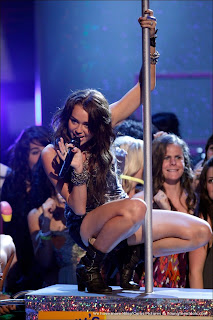 Every once in a while a story comes around that is just funny in so many ways. Early yesterday two strippers from the club Baccala on Independence Ave were involved in a fight around closing time. At some point one of the girls allegedly stabbed the other with some kind of a make up pencil (that is awesome). She was stabbed 4 times and taken to the hospital. The altercation took place in the back room as the girls were changing to leave. The story would have been better had the fight taken place on stage. No charges have been filed as of yet while the police investigate.

Baccala was formerly called Gerry's Silver Slipper. The Silver Slipper had an infamous reputation around Kansas City culminating with a double murder last year leading to the club's closure.

Some thought Missouri's new Adult Entertainment Law would put an end to this kind of entertaining news report. Fortunately for us that was not the case. Another funny side note to the story. You have got to check out Baccala's website. It is possibly the WORST website in the history of the Internet. There are numerous misspellings, the best being an advertisement for "Batchular" parties. Classic.
at 7:30 AM