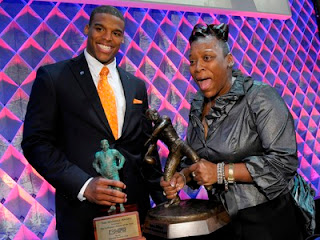 Talented, and most likely criminal, Cam Newton was selected first by the Carolina Panthers in the 2011 NFL Draft.  Newton was caught stealing a laptop computer from a fellow student while at The University of Florida, accused of academic fraud, and his shady father Cecil Newton tried to extort money from several teams who were interested in Cam.  Through some smooth shimmy shimmy coco pop talking and some slippery lawyers, Cecil was able to avoid permanent damage to his son's career despite his ghetto street antics.

Cam Newton led Auburn University to the BCS Championship in 2011, and also won the 2010 Heisman Trophy.

Coaches and professors who were around Cam Newton claim that he is easily influenced by other people, and tended to "hang around the wrong crowd" and has an incredibly inflated ego.

Marty Hurney, GM of the Carolina Panthers has never taken a quarterback in the first round of the draft, but he's got his hands full now with Cam Newton.  There is no doubt that this kid has a lot of talent, but as we've seen time and time again in the NFL, a bad apple can definitely spoil the whole bunch.  Good luck Carolina.
at 7:49 PM