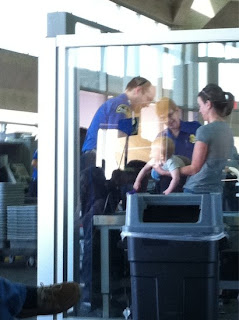 This picture, tweeted by local pastor Jacob Jester, has made international news with an appearance on the Drudge Report. Since the story's emergence on Saturday, it has been picked up around the world, including CBS News.

Saturday Afternoon, the 8-month old's stroller set of the alarm at the pre-flight screening area and further pat downs of family members, including the baby were performed. According to the TSA, the family was "very cooperative" with the pat down searches.

This incident comes less than a month after there was an outcry over the TSA search of a six year old in New Orleans, who's parents made a Federal case of a pat down when they should have told their spoiled brat to deal with it. I'm not in favor of pat downs at all, personally I think we should profile, but until this PC crap goes out the window, your bratty kids are going to have to suffer the same indignities as the rest of us. Maybe, God forbid, you can use the experience as a character builder instead of an opportunity to reinforce the general attitude of whinyness in America today. What a nation of pussies we are.
at 9:23 AM

You could have used this blog post to discuss the important privacy issues involved in the TSA's new enhanced screening techniques and the ACLU's response, briefly outlining both sides of the issue, and providing a well-informed opinion enhanced by documented sources or statistics, instead choosing to insult everyone with children (which according to the Pew Research Center included nearly 4 out of 5 women in 2008) and most of the rest of the thinking population who read this blog and are interested in this timely issue. My baby was also patted down at KCI. I assume you don't have children.

Wow, thanks man! And yes, the author of that article does have kids :)